Coming to Elixir from TypeScript

By Alex Reichert
I've been working with Elixir for about 2 months so far, and it's been quite fun. Coming from a background in mostly TypeScript/JavaScript and Ruby, I wasn't sure how approachable I would find it.
A lot of articles I've read say that most Ruby developers would feel comfortable getting started with Elixir, but I'm not sure how much I agree with that. Aside from some superficial similarities, Elixir really forces you to think about solving problems in a slightly different way.
Over the course of my career so far, I've dabbled in programming languages unrelated to the jobs I've been paid for, but this was the first time I really learned a language by jumping right in and attempting to build a full-stack application. I'm a little ashamed to say that I've spent relatively little time going through books on Elixir, and have mostly just gone straight to hacking on our product. That being said, a lot of the opinions below come from the perspective of someone who probably hasn't written much high-quality Elixir code in production. 😬

Here are a few of the things that make me excited about working with Elixir. 😊

This is an easy one. One of the first things I did when I started spinning up on Elixir was joining the Elixir Slack group, and it's been one of the most helpful resources for me as a beginner. The community has been nothing but friendly, patient, and supportive. When I was misusing with statements, they showed me how to refactor it. When I was starting to set up authentication, they pointed me to Pow. When I needed to set up workers, they showed me Oban. People have even been nice enough to review some of my shitty code on Github. It's been amazing.

It's kind of nice just having so many useful functions built into the language. Want to flatten an array? Boom, List.flatten(). No need to import {flatten} from 'lodash'. Need to group a list of records by a given key? Boom, Enum.group_by(). I could go on and on!
I especially love that lists, maps, and ranges all implement the Enum protocol. For example, if I wanted to map over an object/map in JavaScript and double each value, I'd have to do something like:
Whereas in Elixir, I could just do:
Edit: Apparently there's an even easier way to handle this using Map.new/2! (Thanks to /u/metis_seeker on Reddit for the tip 😊)
Lastly, I love that there are methods like String.jaro_distance/2, which calculates the distance/similarity between two strings. I don't currently use it, but I could see how this might be useful for validating email address domains (e.g. foo@gmial.com -> "Did you mean foo@gmail.com?")

Pattern matching feels like one of more powerful features Elixir offers as language. While it certainly takes some getting used to, I've found that it forces me to write cleaner code. (It's also caused me to write more case statements and much fewer if clauses than I ever have before!)
For example, if I wanted to write a method in Elixir that determines if a user has a given role (e.g. for the sake of restricting access to certain functionality), I might do something like this:
(Note the additional use of pattern matching in the 3rd variant of has_role?/2 to check if the user.role in the 1st parameter is the same as the role provided in the 2nd parameter!)
In TypeScript, the (very rough) equivalent of the above might look something like:
Still confused? I don't blame you. Here's the Elixir code again, with some annotations:
This approach has taken some getting used to, but it's definitely growing on me. For example, one pattern I've started using to roll out new features (e.g. Slack notifications) is something like this:
Not sure how idiomatic that is, but it's a nice way to avoid if blocks!

A lot of JavaScript is conventionally handled asynchronously (non-blocking) by default. This can be a bit tricky for new programmers, but it can be quite powerful once you get the hang of it (e.g. Promise.all is a nice way to execute a bunch of async processes concurrently).
Elixir is handled synchronously (blocking) by default — which makes things much easier, in my opinion — but Elixir also happens to make it incredibly easy to handle processes asynchronously if you would like to.
As a somewhat naive example, when I was setting up our Messages API, I noticed it slowing down as we added more and more notification side effects (e.g. Slack, Webhooks) whenever a message was created. I loved that I could temporarily fix this issue by simply throwing the logic into an async process with a Task:
Now, this is definitely not the most ideal way to handle this. (It would probably make more sense to put it on a queue, e.g. with Oban.) But I loved how easy it was to unblock myself.
If we wanted to implement something similar to JavaScript's Promise.all, Elixir gives us something even better: control over timeouts!
This allows us to shutdown any processes that are taking longer than expected. 🔥

It's almost as if any blog post introducing Elixir is obligated to mention this, so here we are.
Let's just take an example directly from the Papercups codebase. In one of our modules, we do some email validation by checking the MX records of the given domain. Here's how it looks in Elixir:
If I wanted to write this in TypeScript, I would probably do something like:
There's nothing inherently wrong with that, but pipes save us some unhelpful variable declarations, and produce code that is arguably just as readable!
I think the thing people like most about the pipe operator is that it both looks cool AND improves (or at least doesn't detract from) readability. But mostly it just looks cool. 🤓
Since I wasn't able to write anything particulary intelligent about pipes, I'll leave this section with a quote from Saša Juric's "Elixir in Action":
The pipeline operator highlights the power of functional programming. You treat functions as data transformations and then combine them in different ways to gain the desired effect.

I can't tell you how many times I've been writing JavaScript and forgotten that calling .reverse() or .sort() on an array actually mutates the original value. (This almost screwed me over in my last technical interview, embarrassingly enough.)
For example:
I love that in Elixir, everything is immutable by default. So if I define a list, and want to reverse or sort it, the original list never changes:
Hooray! This makes the code much more predictable.

I love that there are so many ways to format and interpolate strings in Elixir. This might be a bit of a niche use case, but the triple-quote """ approach has been super useful for email text templates, since it removes all the preceding whitespace from each line:
If I wanted to do this in TypeScript, I'd have to do something like:
Which just looks... awkward.

What I'm... still getting used to

I almost called this section, "What I dislike so far", but I thought that would be a little unfair. Just because I'm not accustomed to certain ways of thinking doesn't mean I have to hate on it.
So without further ado, here are some of the things I'm still getting used to with Elixir. 😬

One of the first things I noticed when I started to dip my toes in Elixir was the prevalence of methods returning {:ok, result}/{:error, reason} tuples. I didn't give it much thought at first, and found myself writing a lot of code that looked like:
...and then got hit with a bunch of MatchErrors.
As you might have guessed (if you've written any Elixir), this led me to start getting a little overly enthusastic about the with statement. Which if you haven't written any Elixir, looks something like this:
There's nothing particularly wrong with that, but I've also found myself writing some methods that basically just extract the result portion of the {:ok, result} tuple, which feels a little silly:
(It's very possible that the above code is an antipattern, and I'm simply not handling things correctly.)
Anyway, on one hand, I feel like this convention of the language is good because it forces programmers to be more cognizant of error handling. But on the other hand, it definitely takes some getting used to.

Implicit returns (and no return keyword)

While pattern matching is great and all, the fact that Elixir does not have the ability to break out of a function early can be a bit frustrating as a beginner.
For example, if I wanted to write a function to compute the total cost of a bill in TypeScript, I might do something like:
The code above allows me to break early and return 0 under certain circumstances (e.g. when bill is null, or prices is an empty list).
Elixir solves this with pattern matching (as we've discussed in more detail above).
For someone approaching Elixir as a newbie like myself, this can take some getting used to, because it forces you to take a step back and rethink how you would normally design your functions.

Dialyzer and the development experience

There's not much to say here, other than that Dialyzer can be pretty frustrating to deal with at times. Sometimes it's just slow, and warnings take a few seconds to pop up... this is annoying when I: change some code to fix a warning; the warning goes away for a few seconds; I feel good about myself for having fixed it; and then boom, another warning pops up.
Other times, the warnings and just cryptic or confusing: 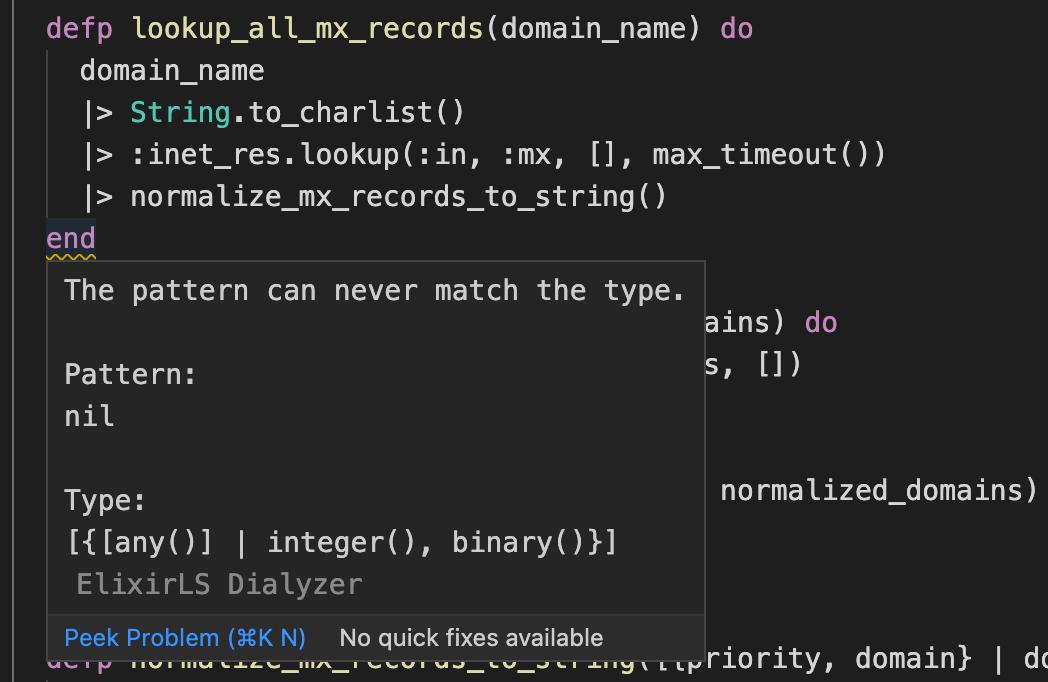 When I was starting off with the Pow library to implement auth, I ran into Elixir macros for the first time. I felt like such an idiot trying to figure out where the pow_password_changeset method was defined, until I finally found this piece of code:
It's pretty cool that Elixir supports macros, but the syntax and the idea of dynamically generating methods is not something I've ever had to deal with. But I'm excited to try it out!

Honestly, I feel like this is true for most languages (other than JavaScript/TypeScript). Since most maps in Elixir use atoms for keys, I've found myself accidentally mixing atom/string keys when I'm unknowing working with a map that has been decoded from JSON.

Unclear trajectory of the language

I honestly have no idea whether Elixir is growing, stagnating, or declining in popularity, but so far things seem much more enjoyable and less painful than I expected.
When we first started building Papercups in Elixir, a few people warned us that the lack of libraries and support would make it much harder to move quickly. While it's clear that the amount of open source libraries is much lower compared to languages like JavaScript, Ruby, Python, and Go, so far this hasn't been a huge issue.
As more well-known companies (e.g. WhatsApp, Discord, Brex) begin using Elixir in production, I'm hoping developer adoption continues to grow. I'm optimistic! 😊

That's all for now!

If you're interested in contributing to an open source Elixir project, come check out Papercups on Github!
Posted on September 17, 2020